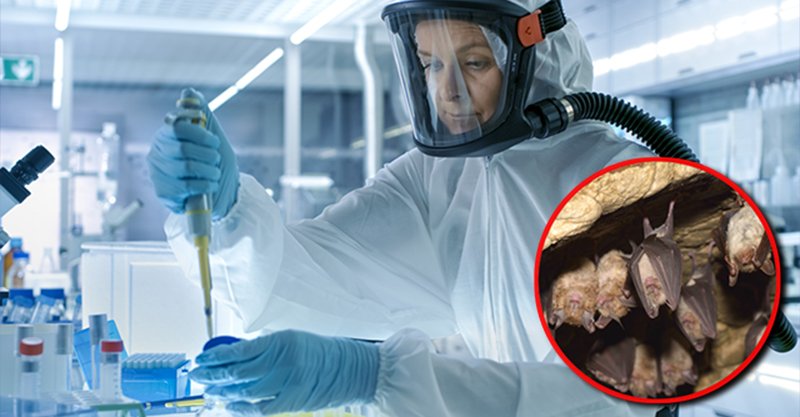 The Daily Mail reported that it has uncovered documents showing that Dr. Anthony Fauci’s National Institute of Allergy and Infectious Disease (NIAID) gave $3.7 million to scientists at the Wuhan Lab at the center of coronavirus leak scrutiny. According to the British paper, “the federal grant funded experiments on bats from the caves where the virus is believed to have originated.”

… these researchers risk creating a monster germ that could escape the lab and seed a pandemic.

Fauci’s studies alarmed scientists around the globe who complained, according to a December 2017 NY Times article, that “these researchers risk creating a monster germ that could escape the lab and seed a pandemic.” Dr. Marc Lipsitch of the Harvard School of Public Health’s Communicable Disease Center told the Times that Dr. Fauci’s NIAID experiments “have given us some modest scientific knowledge and done almost nothing to improve our preparedness for pandemic, and yet risked creating an accidental pandemic.”

In October 2014, following a series of federal laboratory mishaps that narrowly missed releasing these deadly engineered viruses, President Obama ordered the halt to all federal funding for Fauci’s dangerous experiments. NIAID-funded gain of function research continued after the moratorium in a Wuhan-based laboratory. Congress needs to launch an investigation of NIAID’s mischief in China.

[Addendum after our story ran: CNN reports that: “An intelligence official familiar with the government analysis said a theory US intelligence officials are investigating is that the virus originated in a laboratory in Wuhan, China, and was accidentally released to the public. Other sources told CNN that US intelligence hasn’t been able to corroborate the theory but is trying to discern whether someone was infected in the lab through an accident or poor handling of materials and may have then infected others.”] 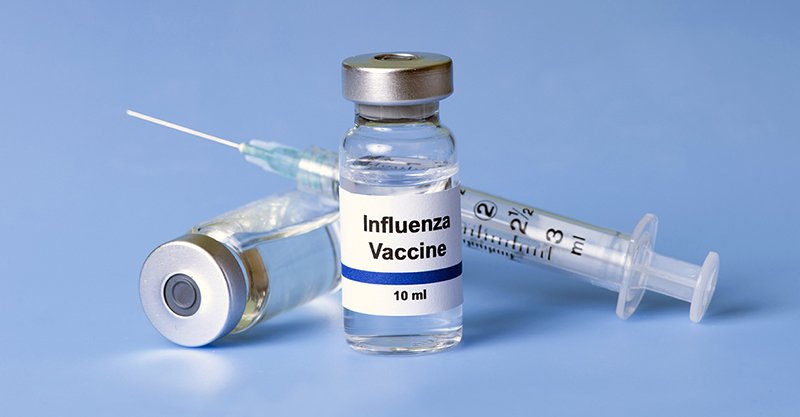 On March 12th, 2020, Anderson Cooper and Dr. Sanjay Gupta held a global town hall on “Corona Facts and Fears.” During the discussion, Anderson said to the viewing audience, “And, again, if you are concerned about coronavirus, and you haven’t gotten a flu shot…you should get a flu shot.”

Setting safety and efficacy of influenza vaccination aside, is Anderson’s claim that the flu shot will help people fight COVID-19 remotely true? The short answer is no.

In fact, the results of many peer-reviewed, published studies prove that Anderson’s recommendation may have been the worst advice he could have given the public.

In searching the literature, the only study we have been able to find assessing flu shots and coronavirus is a 2020 US Pentagon studythat found that the flu shot INCREASES the risks from coronavirus by 36%. “Receiving influenza vaccination may increase the risk of other respiratory viruses, a phenomenon known as “virus interference…’vaccine derived’ virus interference was significantly associated with coronavirus…” Here are the findings: 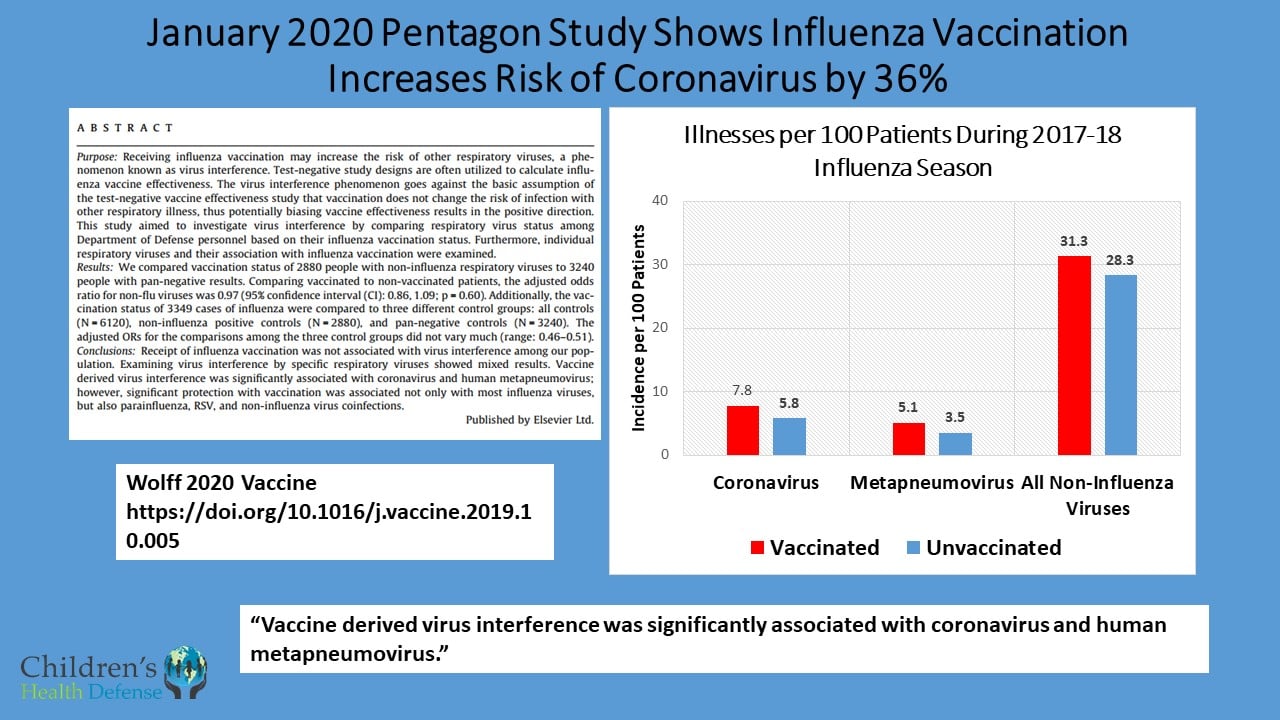 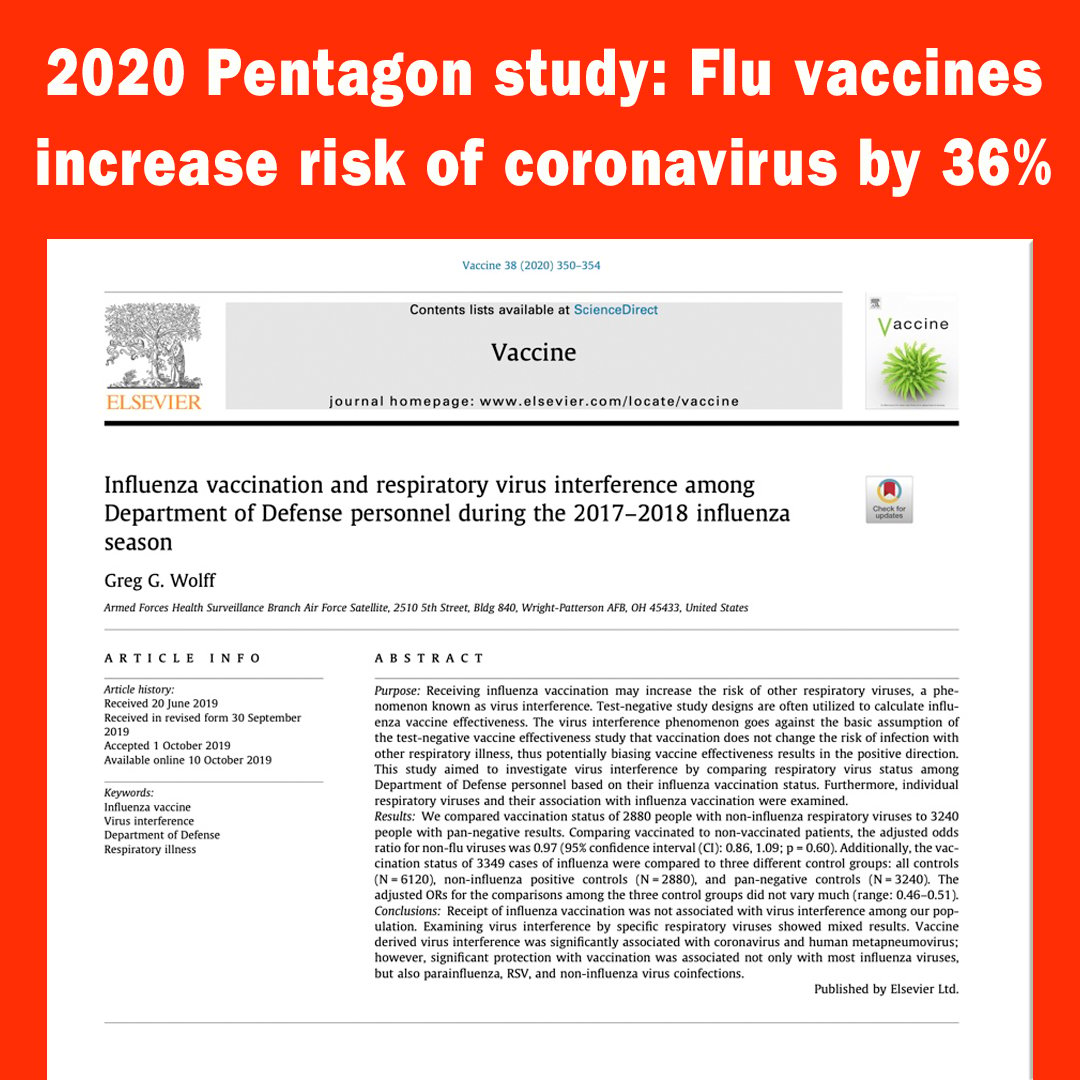 Many other studies suggest the increased risk of viral respiratory infections from the flu shot: 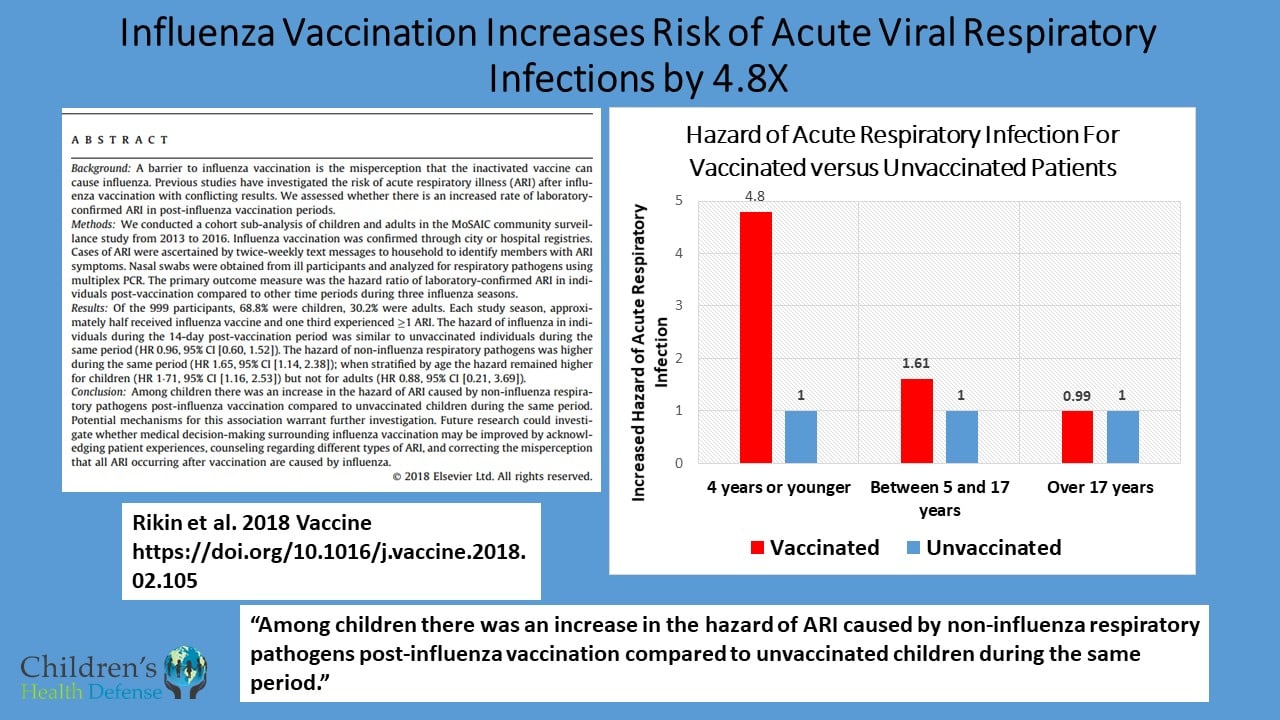 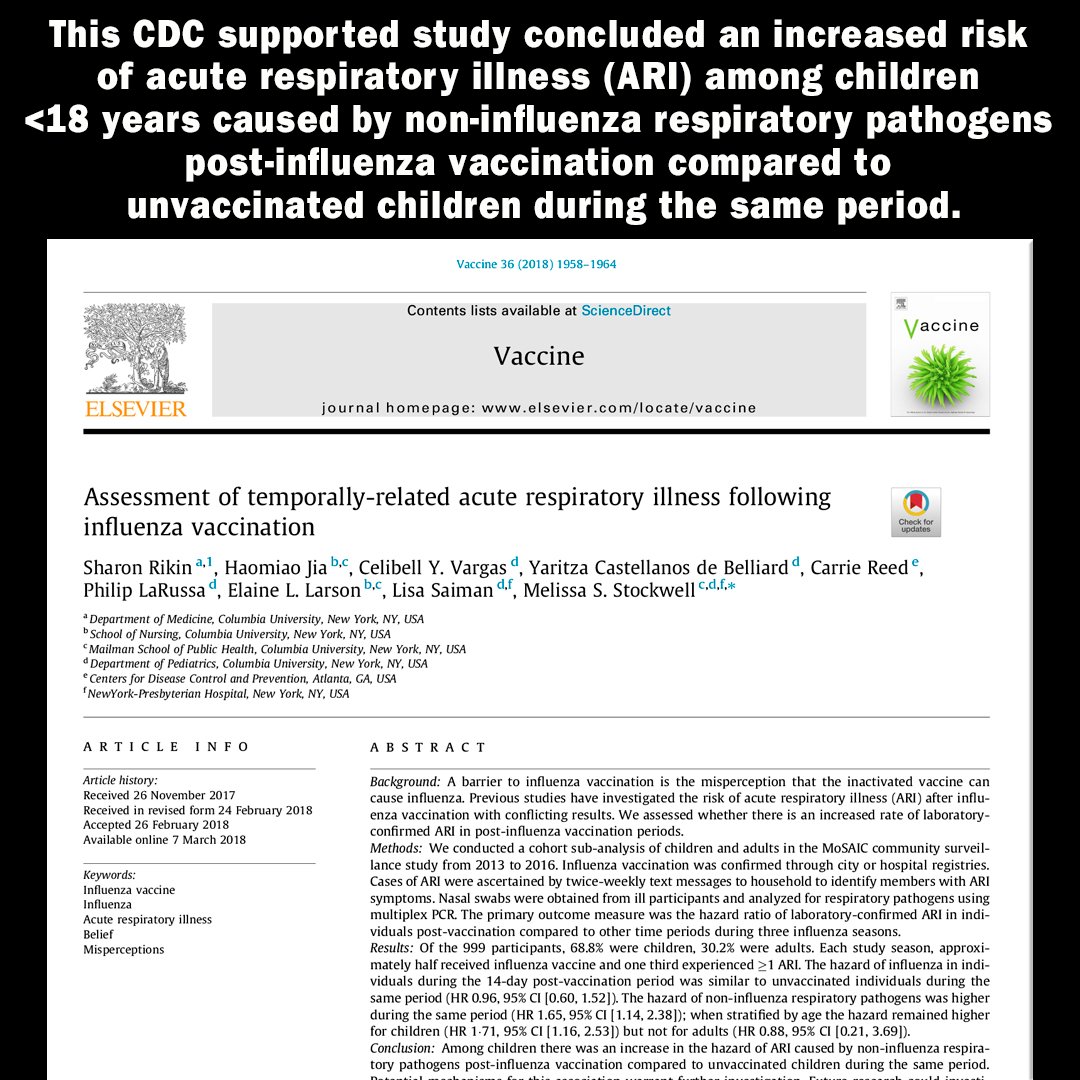 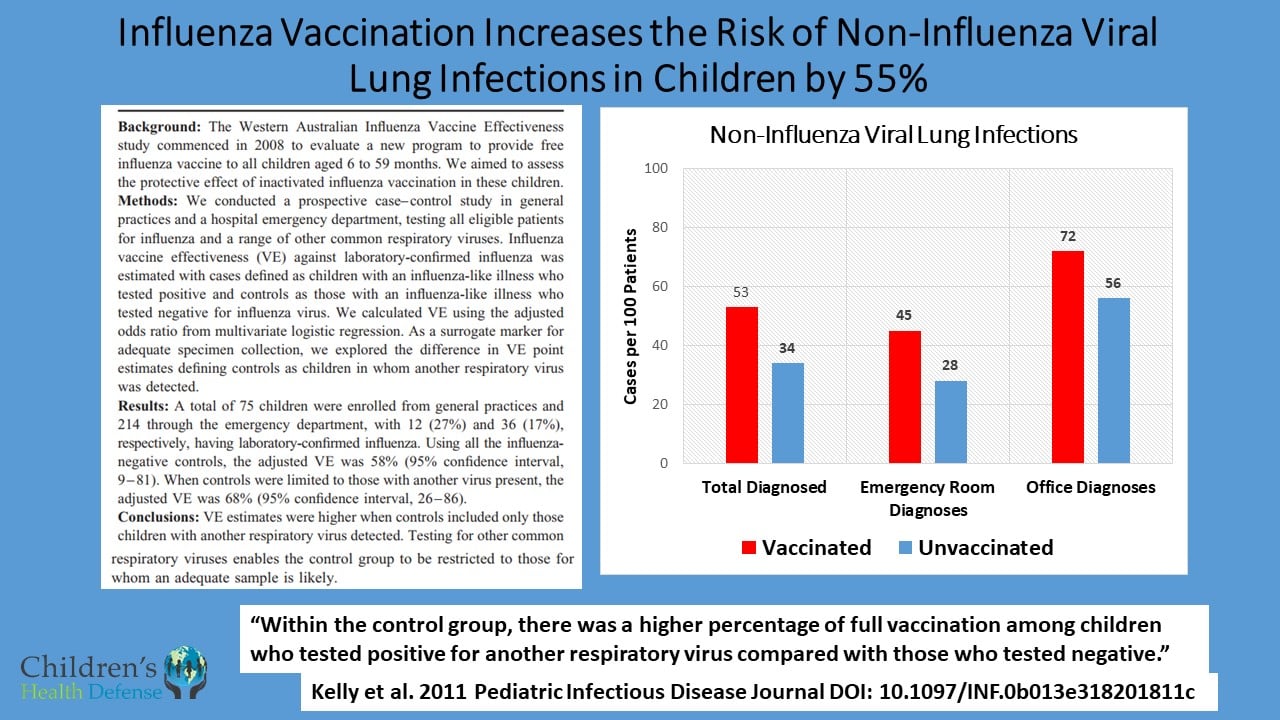 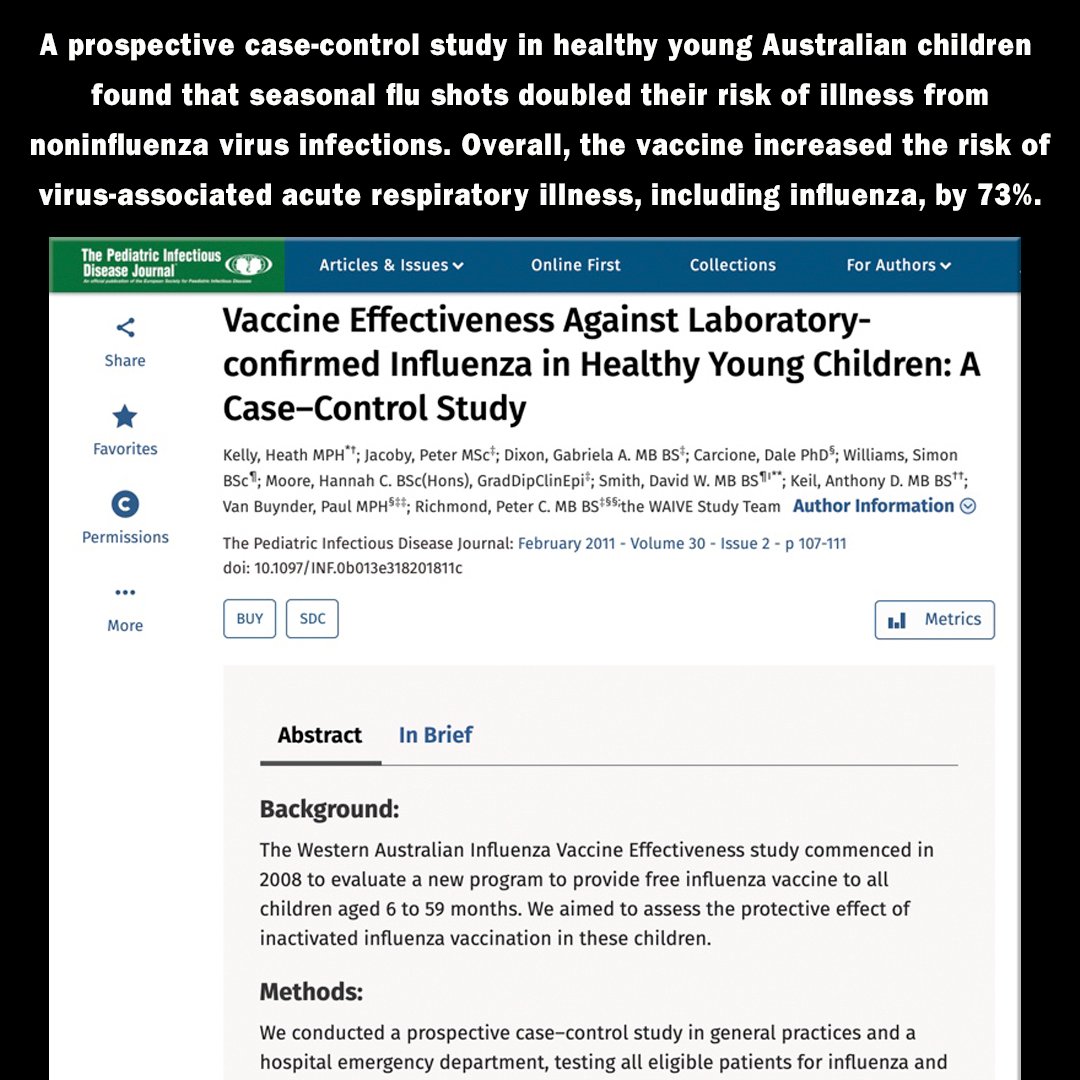 A randomized placebo-controlled trial in Hong Kong children found that flu shots increased the risk of non-influenza viral ARIs fivefold (OR 4.91,CI 1.04—8.14) and, including influenza, tripled the overall viral ARI risk (OR 3.17, CI 1.04—9.83). 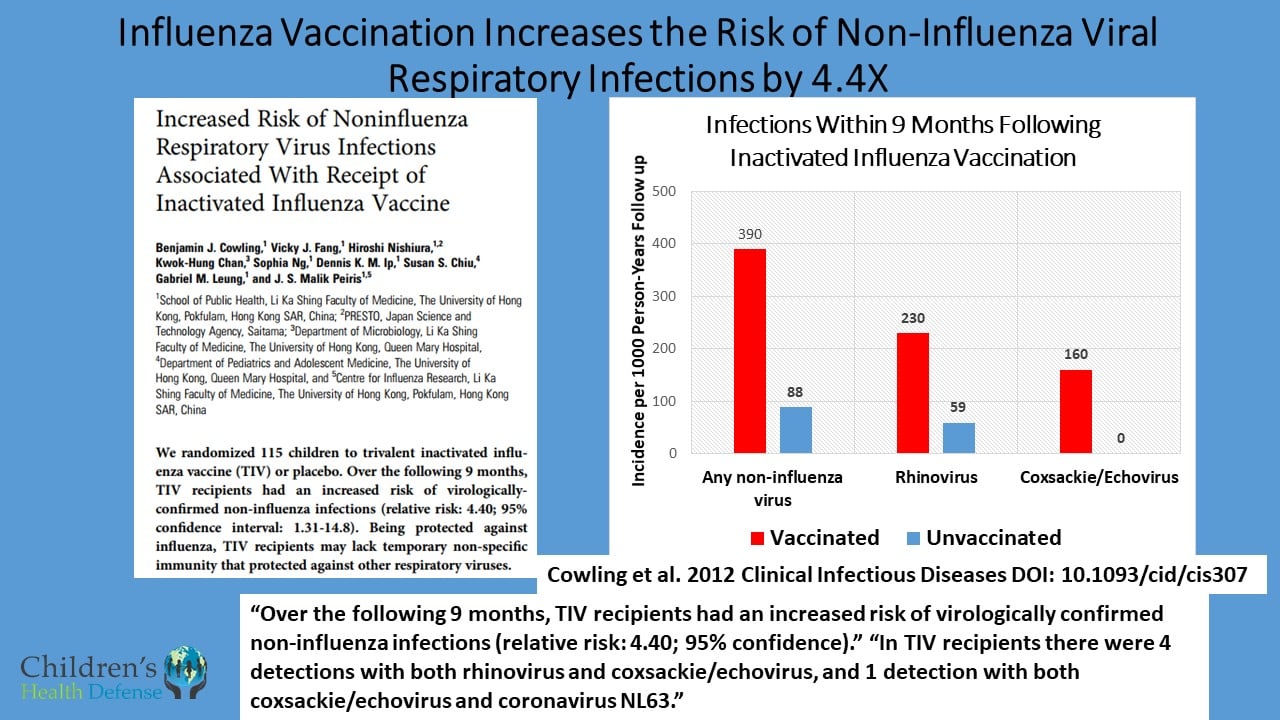 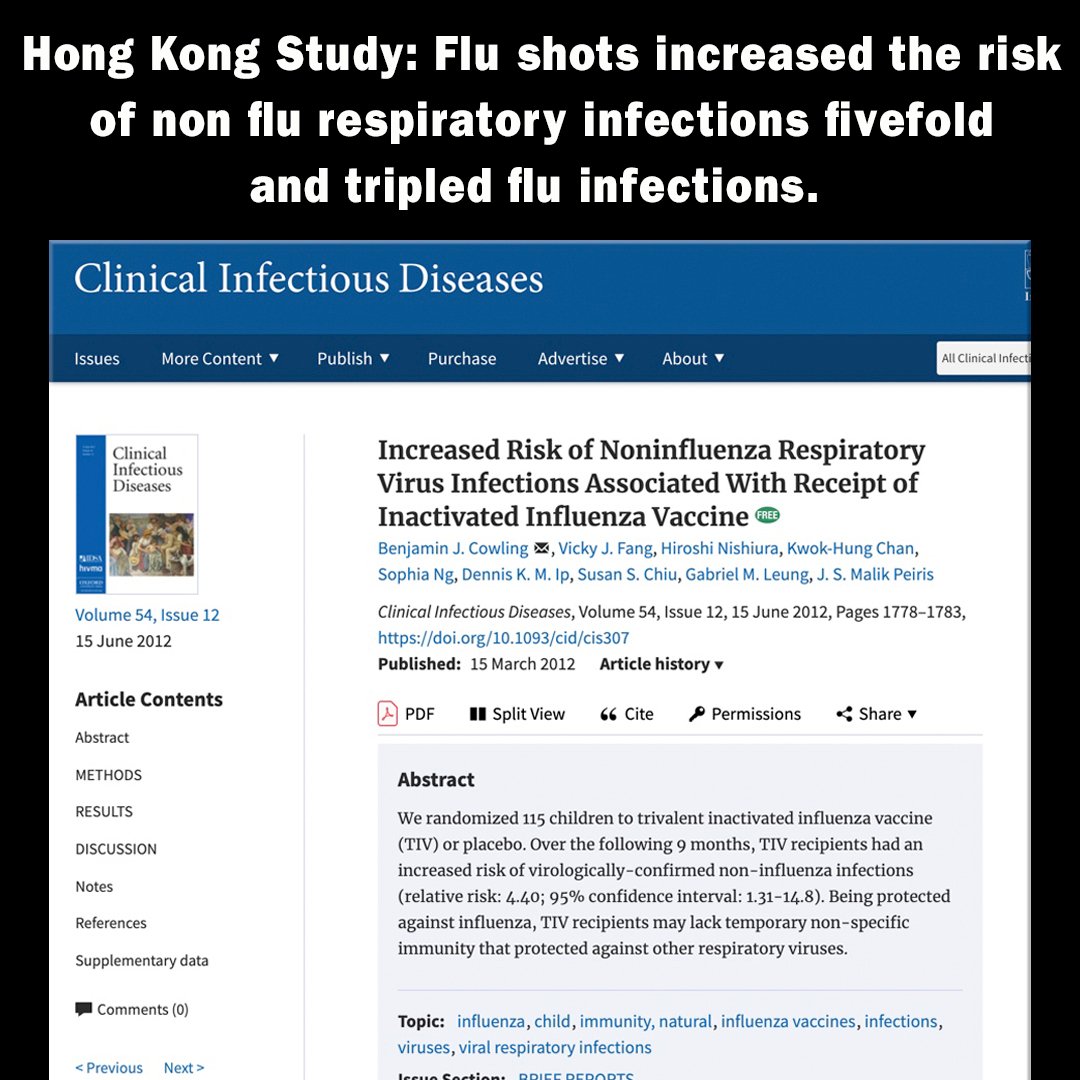 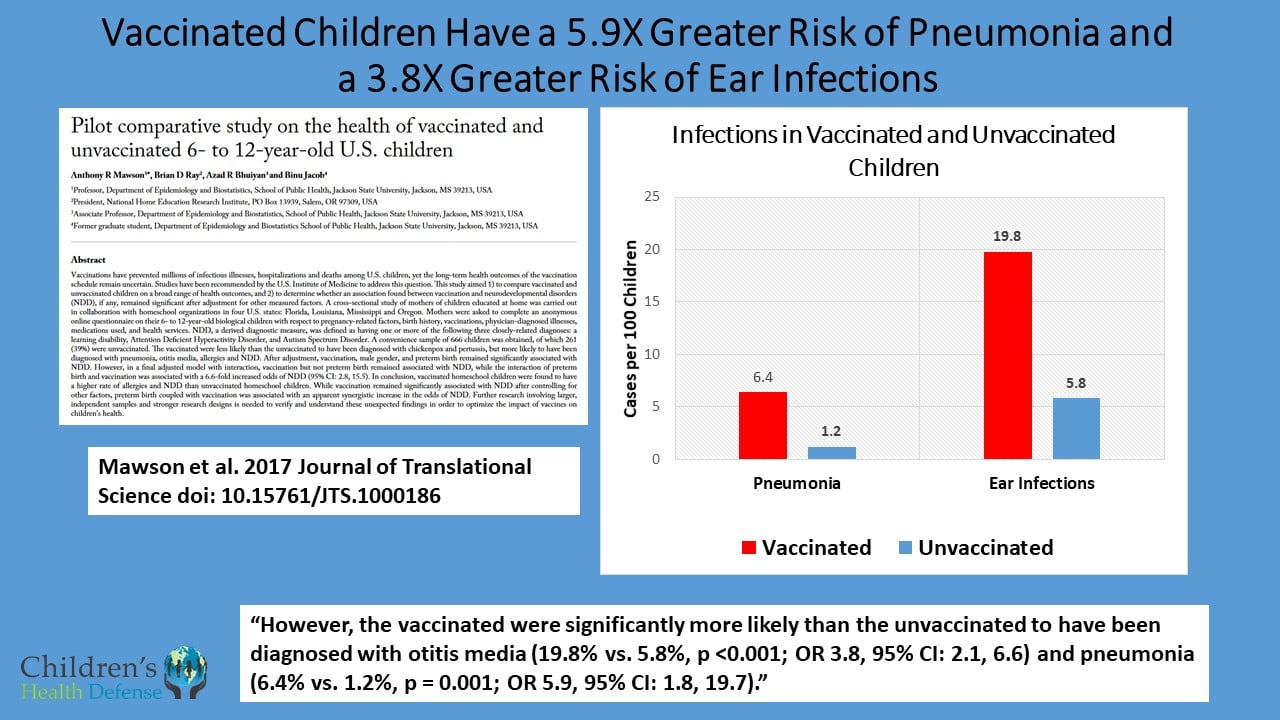 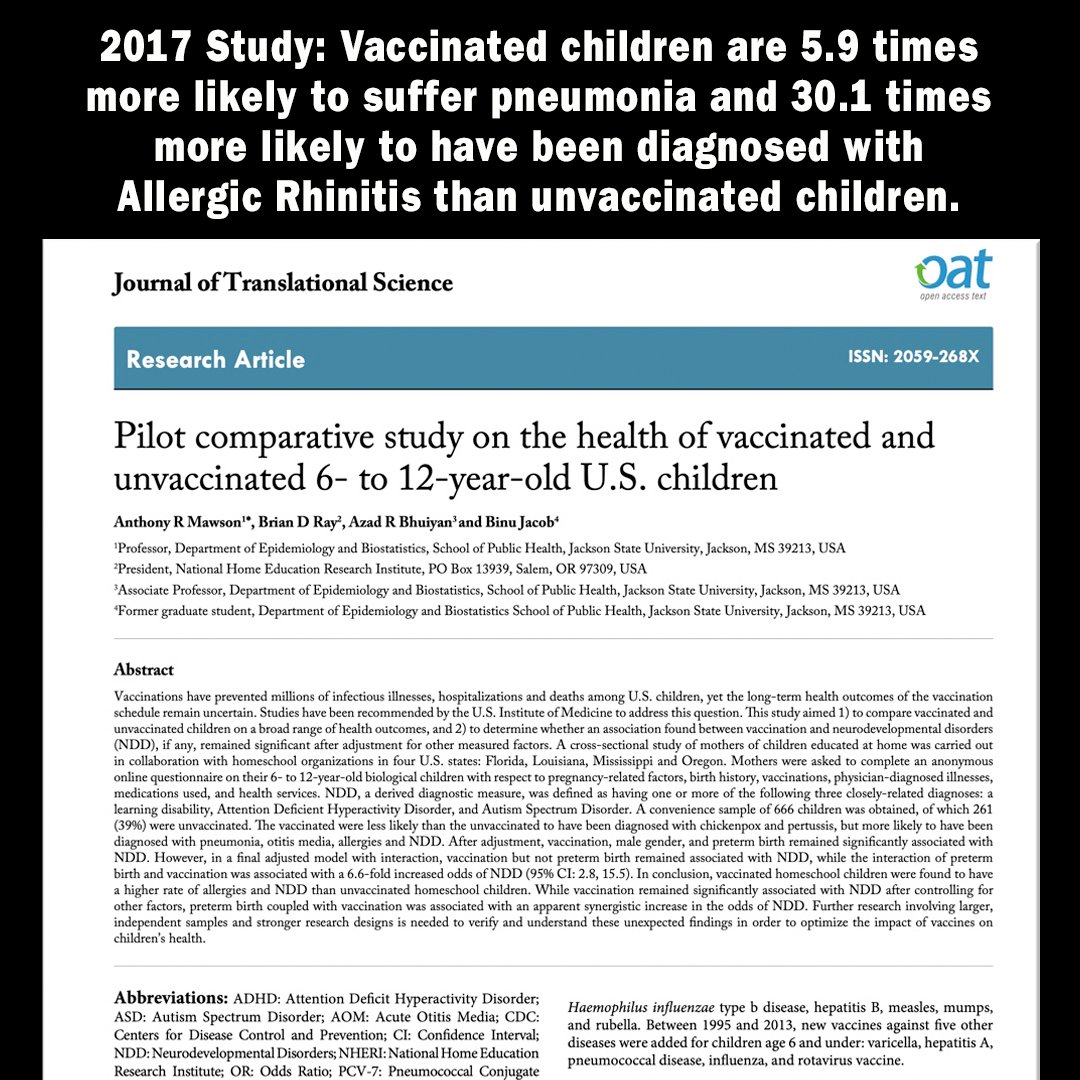 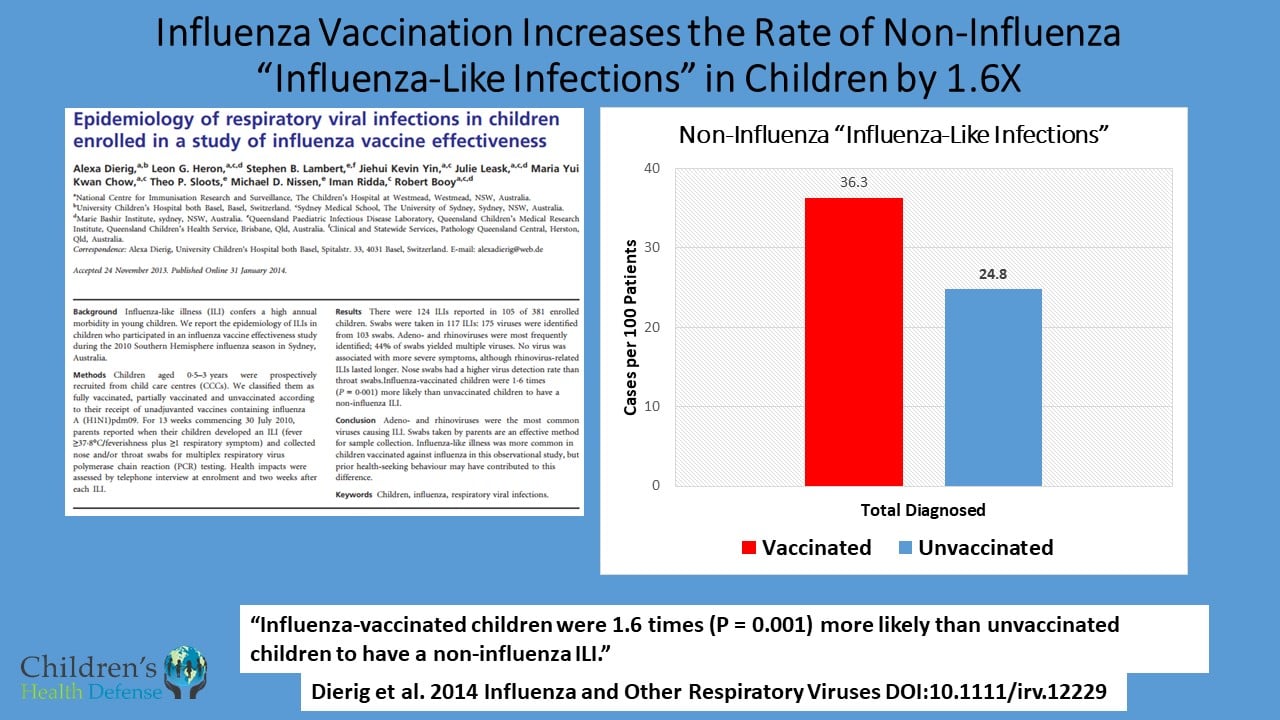 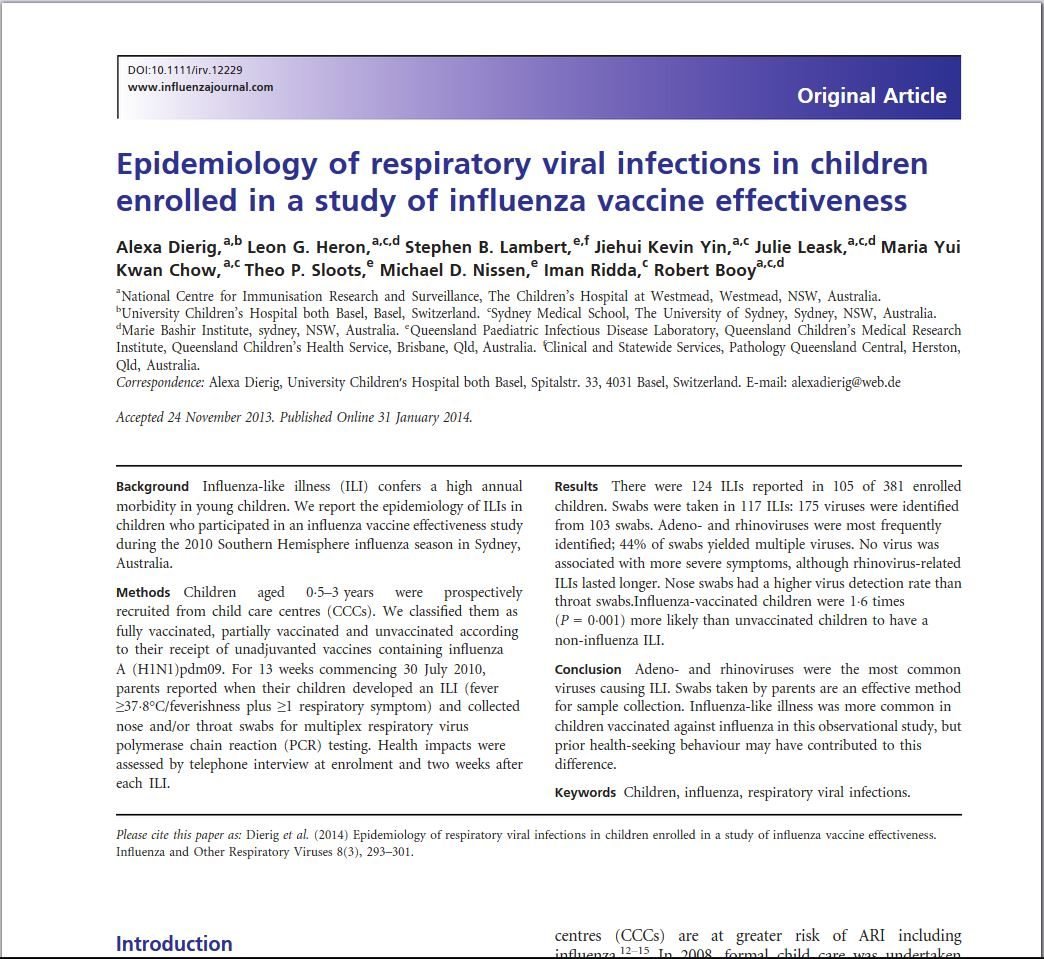 The well-respected Cochrane Collaboration’s comprehensive 2010 meta-analysis of published influenza vaccine studies found that the influenza vaccination has “no effect” on hospitalization, and that there is “no evidence that vaccines prevent viral transmission or complications.” The Cochrane Researchers concluded that the scientific evidence “seem[s] to discourage the utilization of vaccination against influenza in healthy adults as a routine public health measure.”

In their meta-analysis, the Cochrane researchers accused the CDC of deliberately misrepresenting the science in order to support their universal influenza vaccination recommendation.Nevertheless, CNN and other mainstream media outlets continually broadcast CDC pronouncements as gospel and, ironically, ridicules those of us who actually read the science as “purveyors of ‘vaccine misinformation”.