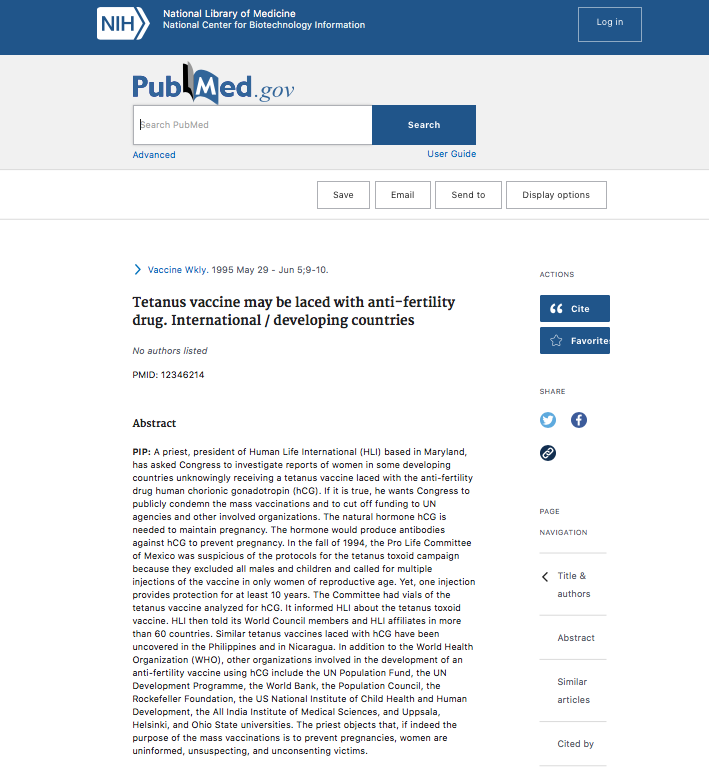 “PIP: A priest, president of Human Life International (HLI) based in Maryland, has asked Congress to investigate reports of women in some developing countries unknowingly receiving a tetanus vaccine laced with the anti-fertility drug human chorionic gonadotropin (hCG). If it is true, he wants Congress to publicly condemn the mass vaccinations and to cut off funding to UN agencies and other involved organizations. The natural hormone hCG is needed to maintain pregnancy. The hormone would produce antibodies against hCG to prevent pregnancy. In the fall of 1994, the Pro Life Committee of Mexico was suspicious of the protocols for the tetanus toxoid campaign because they excluded all males and children and called for multiple injections of the vaccine in only women of reproductive age. Yet, one injection provides protection for at least 10 years. The Committee had vials of the tetanus vaccine analyzed for hCG. It informed HLI about the tetanus toxoid vaccine. HLI then told its World Council members and HLI affiliates in more than 60 countries. Similar tetanus vaccines laced with hCG have been uncovered in the Philippines and in Nicaragua. In addition to the World Health Organization (WHO), other organizations involved in the development of an anti-fertility vaccine using hCG include the UN Population Fund, the UN Development Programme, the World Bank, the Population Council, the Rockefeller Foundation, the US National Institute of Child Health and Human Development, the All India Institute of Medical Sciences, and Uppsala, Helsinki, and Ohio State universities. The priest objects that, if indeed the purpose of the mass vaccinations is to prevent pregnancies, women are uninformed, unsuspecting, and unconsenting victims.”