Saturday, June 13, was a good day. Several hundred members of the health freedom community gathered peacefully in Albany, NY to commemorate the first anniversary of the repeal of the religious exemption to vaccination, to protest the proposal of the New York State Bar Association (NYSBA) to mandate Covid-19 vaccines, and to participate in #ExposeBillGates day. By any measure, the day was a success.All of the speakers below (see poster) participated, as well as Michael Sussman, the New York lead lawyer appealing the repeal of the religious exemption, and pediatrician Dr. Lawrence Palevsky. The speakers eloquently addressed many issues about the recent lockdown, the NYSBA’s proposed mandate, the importance of free exercise of religion and solidarity among people of all political, economic, racial, ethnic and religious communities. 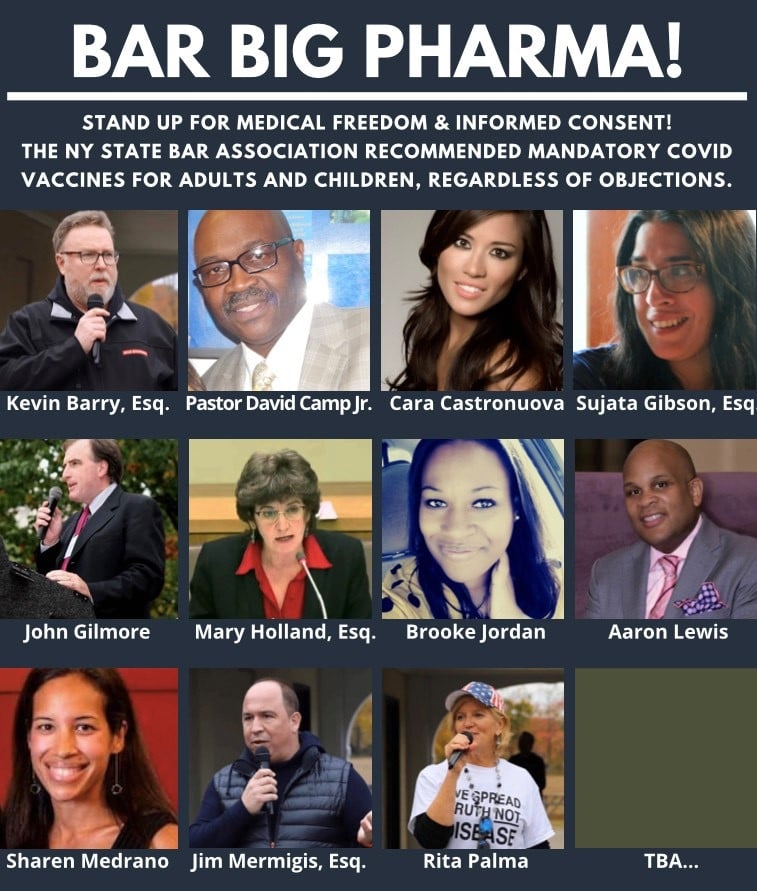 You can watch the speakers’ remarks made in front of Governor Cuomo’s mansion here or here. In addition to the hundreds assembled from all over New York State and elsewhere, over 110,000 people watched live on the Children’s Health Defense and The Highwire with Del Bigtree social media websites.

The NYSBA’s vaccination recommendation was a shot across the bow to mandate COVID-19 vaccines. As advocate John Gilmore has pointed out, every regime craves legitimacy, and it seems likely that Governor Cuomo, who has spoken favorably about COVID-19 vaccines, encouraged NYSBA’s recommendation behind the scenes. That this Association’s effort was met with strong and effective resistance is likely to echo around the world as other Pharma-affiliated groups seek to give cover to industry and government to use the police power for vaccination.

On June 12, the day before the annual meeting, NYSBA radically altered its pro-mandate stance, changing its recommendation from a blanket mandate for every man, woman and child in New York “when the efficacy of a COVID-19 vaccine has been confirmed,” except if “the person’s physician deems vaccination for his or her patient to be clinically inappropriate” to a more moderate recommendation as follows:

Note that the new recommendation mentions testing, evidence, safety, availability, Phase 3 trials including diverse representation and encouragement of vaccine uptake—all concerns not included in its initial report. Note that this recommendation still includes the recommendation of a mandate, but as a last vs. a first resort.

Of course even this recommendation is extremely problematic, leaving to “public health authorities” and not to individuals or even duly-elected legislatures the decision to override informed consent, bodily integrity, privacy, parental rights, free exercise of religion, equal protection and due process. The revised recommendation proposes no balancing of the competing interests at stake, and much like the public health officials who have presided so far, eyes solutions to COVID-19 with the tunnel vision of “consensus science.” But the fact that the Health Law Section substantially walked back its initial bald endorsement of state and national vaccine mandates is not even the best news.

The chair of the Trial Lawyers Section was particularly concerned that the report had little input on how vaccination mandates and access to vaccines affect minority communities.

The best news is that after robust dialogue (see video of NYSBA’s annual meeting available here), NYSBA’s House of Delegates decided to postpone consideration of the 84-page report, as amended regarding vaccinations on June 12, 2020, to its regularly scheduled meeting in November. The vote postponing consideration of the report was 53%-45% with 2% abstaining. In other words, a fairly wide margin acknowledged that it was unwise to rush through such an important and controversial report.

Although the members who worked most closely on the report urged the delegates to vote on it by the end of June, other voices prevailed, including several past Association presidents. Several past presidents voiced concern about the fact that a COVID-19 vaccine does not yet exist, so to endorse it is inappropriate. Many made the point that key Association committees had not yet weighed in on the wide-ranging report. These included committees on trial law, elder law, trusts and estates, diversity, criminal law and civil rights. One past president went so far as to describe the Health Law Section Task Force report as a “wish list of the health care industry,” suggesting that patients’ rights attorneys and medical malpractice plaintiffs’ attorneys would likely find many provisions objectionable.

The debate also focused on controversial liability protection provisions for healthcare workers in the context of end-of-life decision making. Some speakers noted that although the context of the report is COVID-19, the implications would be far broader. The chair of the Trial Lawyers Section was particularly concerned that the report had little input on how vaccination mandates and access to vaccines affect minority communities. She called for input from Black and Hispanic medical associations.

He stated that the staff had received “thousands, thousands of phone calls and emails on a daily basis.

The immediate past president of the Association, Hank Greenberg, specifically spoke to those who had voiced opposition to the NYSBA report. He asserted that “a very disciplined, very effective group of lobbyists” had “besieged the staff.” He stated that the staff had received “thousands, thousands of phone calls and emails on a daily basis.” “It has been like nothing I have ever, ever seen.” He claimed that such opposition was “intimidation of our leaders” and should not be rewarded. He urged members not to postpone the report, but rather to conclude the vote in June. His argument lost the day.

What was wonderful—both in the gathering of protesters and in the videotaped NYSBA meeting—was genuine communication. People of differing views coming together to debate, consider, reflect and listen to one another. Healthcare responses to COVID-19 need debate—indeed, presumably this is what NYSBA sought, although it apparently did not expect such a strong response as what it received.

NYSBA’S Health Law Section changed its vaccine recommendation and its House of Delegates did not endorse its report, unquestionably in part because the health freedom community put them on notice. A huge thanks to all who spoke up, showed up and voiced opposition to COVID-19 vaccine mandates.

Thank you to BF for sharing this article w/ us at ZMV!