Roundtable resolution: “Coronavirus: the fight against the virus or the rights of the people?” 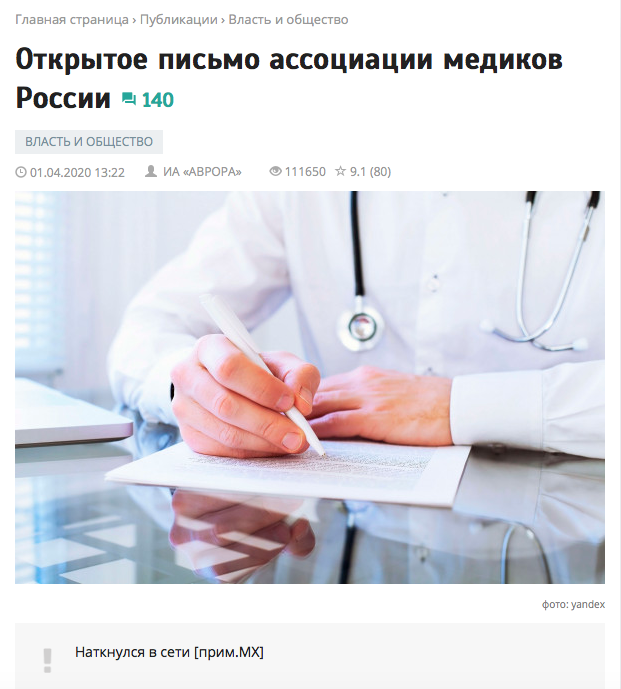 To the President of the Russian Federation V.V. Putin

To the Government of the Russian Federation

To the Federal Service for Supervision of Protection

To the Ministry of Education of the Russian Federation

To the Ministry of Health of the Russian Federation

We, the indigenous people of Russia, civic activists and a team of doctors with higher medical education, participants in the roundtable “Coronavirus: the fight against the virus or the rights of the people?”, held on March 22, 2020, demand that you stop panic among the population of our country. Currently, on all central television channels and in all news feeds of Internet networks, 70% of news consists of terrifying information about coronavirus, while neither the Ministry of Health, nor the Government, nor the media have yet given a true explanation of the disease.
It is not a particularly dangerous infection: this is a classic severe acute respiratory viral infection. According to statistics, SARS and influenza epidemics occur every two to three years, pandemics every twenty to thirty years.  As for pneumonia as a complication of CVID, only people with weakened immunity die. According to all classical definitions of the science of epidemiology and infectious diseases, there are currently no pandemics and epidemics in the world. An epidemic is the spread of an infectious disease to 5% of the population, and a pandemic is an infectious disease epidemic that characterizes spread to the territory of a neighboring state and countries of the world. Medical experts say that there is currently no epidemic in the world, let alone a pandemic!   But their voices are deliberately drowned out by the screaming and panic-stricken media.

We also believe that there is a deception at the highest levels of power around the world. Open sources report that death of older people from age-related diseases seems to be a fatal outcome from coronavirus. It doesn’t hide that the elderly die first of all. So in Italy, where deaths are high, the vast majority of deaths are among the oldest population, the average age of the dead is 79.4 years.

Even physicians do not have clear and reliable information about whether there is a test for the detection of coronavirus. Immunologists confirm that it is impossible to do a test for a new virus so quickly and on such a global scale. Which test is actually carried out on the sick is not known reliably. Then, on the basis of what is the diagnosis made to people quarantined? This is a legitimate question to the organizers of the panic.

In this regard, we believe that an internationally planned panic campaign is under way with the preparation of the soil for the introduction of an electronic concentration camp, which looks like a kind of “teaching” on subjugating the population to military suppression under the pretext of danger to life. And WHO, declaring a pandemic, apparently simply complied with the order of the world elite, who wants to subjugate the population of the entire planet, as the theory of the “golden billion” requires for the introduction of the New World Order!

In our opinion, the people are plunged into the horror of death so that they agree to self-isolation. It is known that loneliness injures the psyche much more than other stresses. Alone, a mentally unbalanced person loses his last immunity and common sense. It is very easy to control the powerful of such a world so violently fragmented and in a stupor of horror. And mortality is just from such stressful measures and can increase significantly.

We also believe that under the pretext of quarantine and behind the curtain of panic, digitalization of the whole society is being introduced. Everything suggests that distance learning, telemedicine, a single database containing information about each citizen, to which cameras with face recognition will be tied, is an electronic concentration camp, which intelligence officer John Coleman told the world about on the basis of archives of Western intelligence agencies he studied that contain plans for world government. But since society protests against such measures of total control, they are introduced forcibly under the pretext of an epidemic.

There is an opinion that universal quarantine is an excuse to introduce 5G technology. During quarantine, people are forced to work, study, order products online, the load on it has increased several times. But the public has long been protesting against the introduction of 5G, because it believes that this technology is harmful to the health of citizens, as it requires an increase in the number of base stations for cellular communications. Independent scientists warn that the electromagnetic fields of 5G base stations carry out total irradiation of the entire human body, which will lead to an increase in the incidence, in particular oncology.

It is known that along with 5G technology, the technology of “smart dust” – microscopic chips – has been developed. They can be mixed in water, in food, can be sprayed from an airplane in the form of aerosols. Thus, it is possible to imperceptibly introduce chipping and total control of the entire population. And it is precisely for the connection of nano-chips with control centers that we need a high-speed 5G Internet connection. For any daily needs, the super-speed that 5G provides is not required! The introduction of digitalization in all areas of life along with 5G technology will complete the creation of an electronic concentration camp.

Immediately stop misinforming and traumatizing the psyche of the population, and prohibit all federal media from broadcasting information about coronavirus by more than 20% of airtime.
Provide specific tests for COVID-2019 to the public. There is evidence that the live COVID-2019 virus has not yet been isolated, the test for it has not been created, and the genome has not been isolated – that is, the public is misled. It is necessary to do everything so that independent scientists are convinced that the words of the media do not diverge from reality, we have already experienced too many fake media.
Provide all state medical institutions in all regions of the country with specific tests for the COVID-2019 virus, and not for the covir-SARS virus or for ordinary coronaviruses (as is done now).
Daily publish real information about the number of patients whose diagnoses are confirmed by tests for COVID-2019, and not by tests for ordinary coronavirus, suspected of it or established by the clinical picture. To provide the public commission with the opportunity to monitor real statistics of sick and dead precisely from the COVID-2019 virus.
To abolish unnecessary and meaningless quarantine measures in educational institutions and distance learning, as excessive and rash, violating the fundamental rights of us and our children. Disease statistics do not give the right to declare either an epidemic or a pandemic!
Link to Original Article in Russian
Thank you to S. for contributing this article to ZMV!