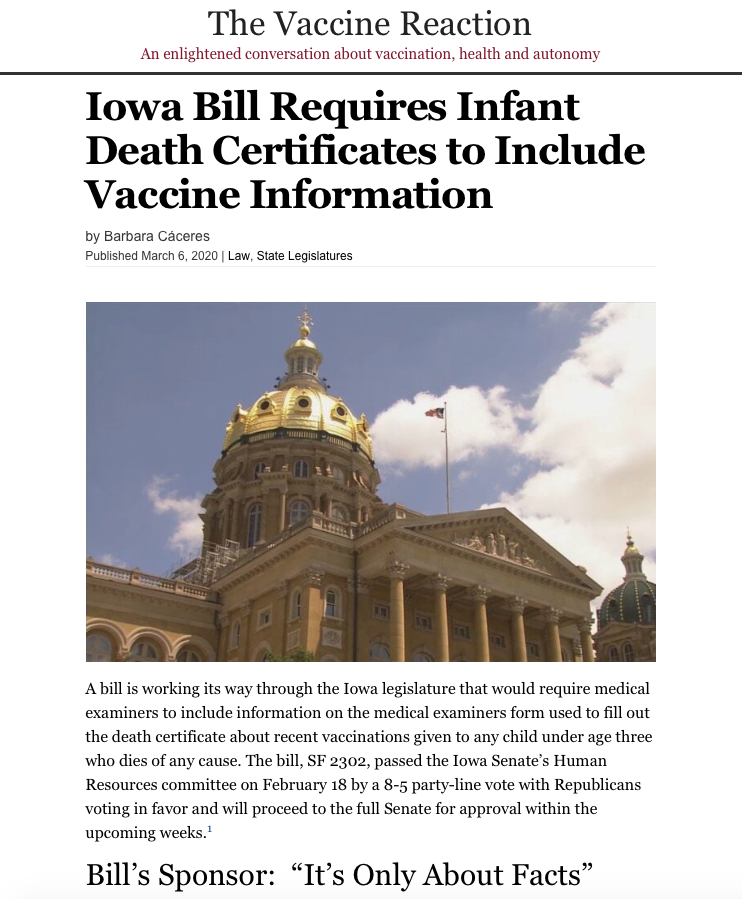 Sen. Dennis Guth, the bill’s sponsor, was approached by a medical examiner who said that the death certificate for a child three years old and younger included eight questions about the last thing the child ate, and only one question about vaccination, which was whether the child was up-to-date on recommended vaccines at the time of death. The medical examiner felt it would be important to know a little more about the vaccination history of a child who died. “I thought it was a reasonable idea, and it’s something that’s not pro or anti vaccination, it’s only about understanding what’s going on. It’s only about facts.” Iowa has about 40 sudden unexplained infant deaths each year.2

In the Senate subcommittee meeting, the bill was met with opposition from public health officials and Iowa’s medical trade associations. Amy McCoy, with the Iowa Department of Public Health, stated they are “undecided” on the matter but cited concerns about accessing vaccination records due to HIPPA, the federal law protecting patient privacy.

Dennis Tibben, representing the Iowa Medical Society and the Iowa Chapter of the American Academy of Pediatrics, stated their concern was the potential to slow down child death investigations. “We have several county medical examiners amongst our membership who have voiced concerns about the practical implications of accessing medical records.”

We owe it to our children to maintain Iowa’s strong culture of vaccinations. We are concerned that the package of vaccine-related bills that have been introduced this session will not together increase Iowa’s vaccination rates or serve to protect children from vaccine-preventable diseases, to the contrary. We’re concerned that they will introduce doubt to parents who have well-placed trust in their medical providers and the public health community.

Deborah Thompson, a volunteer with the Iowa Public Health Association was worried about what would be done with the information collected. “We put this information on, and then what? Which set of researchers pick it up and then what happens to it then? How is it used to wield in defense or for a particular set of arguments?”

Section 164.512(g)(1) of HIPPA law allows for disclosure of medical records to be shared with “medical examiners or coroners to assist them in identifying the decedent, determining the cause of death, or to carry out their other authorized duties.”3 Deputy state medical examiner Jonathan Thompson, MD, said collecting the information would add only an hour of extra work.

The Department of Public Health already has a child death review team, which investigates any death of someone under 18 that is not a natural death. This review includes past medical history and sometimes includes vaccination history. While information on death certificates are publicly available, the vaccination information would only appear on the medical examiner’s form, not the death certificate, and, would not be made public.

Brei Johnson, president of Informed Choice Iowa, argued in support of SF 2302. “Everybody should work really hard to unturn every stone to get those parents the answers that they deserve, whether it’s a police officer, whether it’s a medical professional, whoever,” she said. “

We should be getting those parents the answers they deserve. To turn over every single rock—but not to leave this one turned over—I start asking a lot of questions why. Why wouldn’t we turn that rock over and give those parents that answer and be able to check that box without clear thought or without a doubt that no, your baby did not die from that vaccine? Or, maybe, start looking and creating statistics here in Iowa that might show it is.

Shanda Burke, a concerned citizen and certified medical assistant said, “If you want people and patients and parents to be sure of their choices, have the study. Show the information. This is gathering information. I don’t see why that would lead to vaccination hesitancy. We shouldn’t be placing vaccination rate above a good policy. This is a good policy to gather information to determine whether or not there is a correlation, and if there is not, we’ll accept that.  If there is, we need to figure out what to do.”

No one is saying we shouldn’t be vaccinating, no one is trying to encourage people not to vaccinate. If you want to stick with the safe and effective mantra, great, let’s do it, but this would solidify that claim. So I’m not sure why this data is being questioned. We should welcome it with open arms. I don’t see parents hesitant to give Tylenol, because that’s also being collected.

Sen. Jim Carlin, who chaired the committee, ended by asking, “So here’s my question. Where’s the downside to looking at 30 or 40 cases a year, just to supplement the research, to give more context to the research. It doesn’t seem like a big burden.”

When asked about the pushback from the public health and medical establishment, Sen. Guth commented that he was not surprised.

It is well known that they support vaccination without any reservations whatsoever. The idea that they would resist collecting data in such a painless way is a bit stunning. It is not rational. Is it so important to not do anything to cause any possible hesitation about vaccines that we refuse to collect objective data? That is ridiculous! The only way to get rid of hesitancy is to have good solid data to support the safety of vaccines. The collecting of data at the death of an infant could provide some of that information. If it does show a link between infant death and vaccines, isn’t it our responsibility to use that information to track down the reason and make some changes in timing or contents of the vaccine? The medical field needs to rely on real science, not emotion.4

At the full meeting of the Iowa Senate’s Human Resources Committee meeting, Sen. Carlin supported that viewpoint. “It doesn’t seem unreasonable to me that we should try to get good information, good data on this topic,” he said.

The CDC collects data on sudden unexplained infant deaths (SUID) using The Sudden Unexplained Infant Death Investigation (SUIDI) Reporting Form.  This form requests information on any vaccination or medication given to infants 72 hours prior to their death,5 and “produces information that researchers can use to recognize new threats and risk factors for sudden unexpected infant death (SUID) and sudden infant death syndrome (SIDS).”

“Crib death” was so infrequent that it was not mentioned in infant mortality statistics until 1969, when medical certifiers presented a new medical term—sudden infant death syndrome (SIDS).6 In 1973 the National Center for Health Statistics added a new cause-of-death category for SIDS to the International Classification of Diseases (ICD), which is used to code and classify morbidity data.  By 1980, SIDS had become the leading cause of post neonatal mortality in the United States.7

According to the CDC, SUID is still the leading cause of death for babies one month to one year of age, and while it occurs in all socio-economic, racial and ethnic groups, American Indian/Alaska Native and non-Hispanic black infants have a SUID death rate more than two to three times that of Caucasian infants. Hispanic and Asian/Pacific Islander infants had the lowest rates of SUID.9

To address the unacceptable SIDS rate, the American Academy of Pediatrics issued safe sleep recommendations in 1992 and initiated a “Back to Sleep” campaign to convince parents to place infants on their backs during sleep in 1994, and the CDC released their Sudden Unexplained Infant Death Investigation Reporting Form in 1996. According to the CDC, rates of SUID declined considerably beginning in 1990, but the declines have slowed since 1999.12

In recent years, the CDC reports that sudden unexpected infant deaths are being classified less often as SIDS, and more often as accidental suffocation or strangulation in bed, or unknown cause. Other researchers13 14 15 16 noticed the same thing—as SIDS rates decreased, deaths attributed to asphyxia or non-SIDS causes of unexpected infant death increased, suggesting that a change in classification, rather than a decrease in incidence, may be occurring.

U.S. Court of Federal Claims Case Finds Causal Relationship Between SUID and Vaccination But is Overturned

The CDC states that the timing of the two month and four month shots and SIDS has led some people to question whether they might be related. However, federal health officials state that there is no relationship between vaccination and the sudden unexpected infant death of previously healthy babies after vaccination. The CDC further argues that, because the rate of SIDS declined dramatically following the 1994 Back to Sleep program and stabilized in the 2000s at a time when the number of recommended infant vaccinations was increasing, vaccines are not linked to SIDS.17

A 2014 study18 examining the causal relationship between hexavalent vaccination and sudden infant death concluded that there was sufficient evidence to warrant post-mortem examination by an expert pathologist to evaluate the possible causative role of vaccines in SIDS.

In July 2017 the Office of Special Masters of the U.S. Court of Federal Claims, known as the vaccine court, ruled in favor of the petitioner in Boatman & Cupid vs. Secretary of Health and Human Services that vaccination caused a child to die from SIDS.  Testimony from neuropathologist Douglas Miller MD, an expert on cytokines, and Harvard neuropathologist Hannah C. Kinney, MD and her colleagues, was instrumental in the decision.

The role of pro-inflammatory cytokines in tipping the molecular balance in the underdeveloped brainstem is thought by multiple experts to be a potentially critical factor in the pathology of SIDS. In his official conclusion in Boatman & Cupid vs Secretary of Health and Human Services, special master Thomas Gowen stated:

The decision was appealed and in 2018 the Court of Federal Claims overturned the decision because it ignored previous decisions and applied too low a standard of proof. That decision was further confirmed by a three-judge panel in November, 2019.20 Judge Newman, writing in dissent of that ruling argues,

The panel majority, adopting the government’s argument, holds that Vaccine Act compensation does not apply because J.B.’s death was not shown to have resulted from the immunizations. The majority states that the cause of death was not the vaccine, but was SIDS. The majority states that “because the Petitioners failed to present a sound and reliable theory of how vaccinations can cause SIDS, they have also failed to show that vaccinations caused or contributed to J.B.’s death from SIDS. However, SIDS is not a cause of death, SIDS is an admission that the cause of death is unknown. The close proximity between vaccine administration to a healthy baby, and fever and death soon thereafter, presents a sufficient relationship among these events to produce a reasonable—likelihood, a prima facie case that the vaccine caused or contributed to the injury.

Noting that the infant mortality rate (IMR) is one of the most important indicators of the socio-economic well-being and public health conditions of a country, a 2011 study by Neil Miller and Gary Goldman, PhD21 found that the U.S. childhood immunization schedule requires 26 vaccine doses for infants aged less than one year—the most in the world—yet 33 nations have better infant mortality rates.  Using linear regression, Miller and Goldman examined the immunization schedules of these 34 nations and found a correlation between infant mortality and the number of vaccine doses routinely given to infants.

These findings demonstrate a counter-intuitive relationship: nations that require more vaccine doses tend to have higher infant mortality rates. The authors concluded that finding ways to lower preterm birth rates should be a high priority, and that a closer inspection of correlations between vaccine doses, biochemical or synergistic toxicity, and infant mortality was needed.