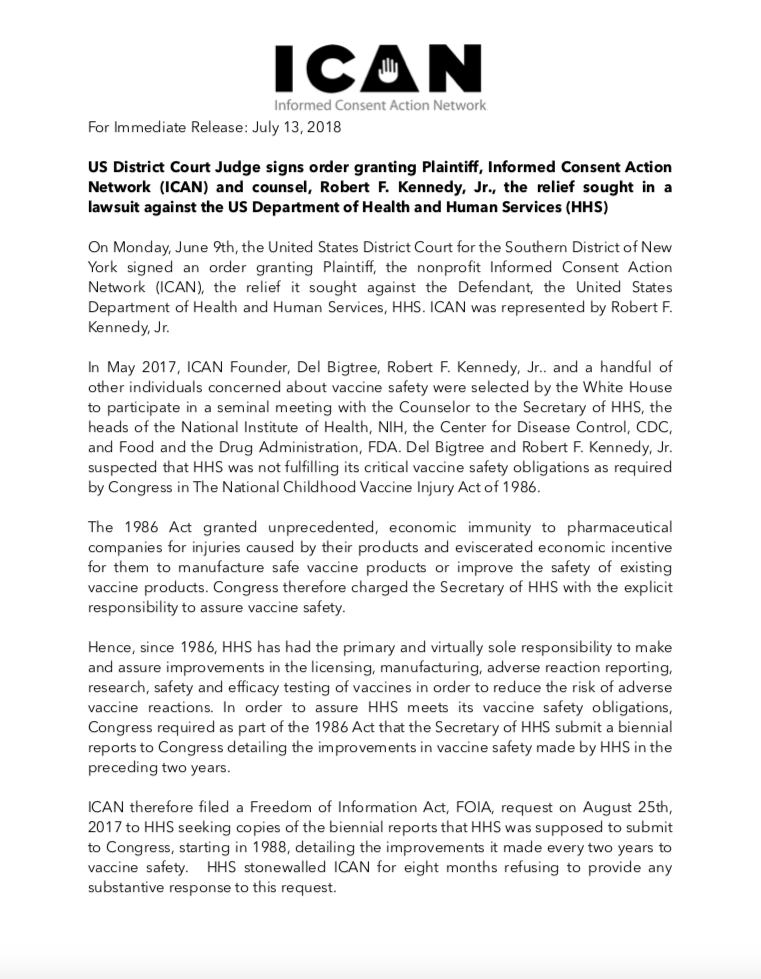 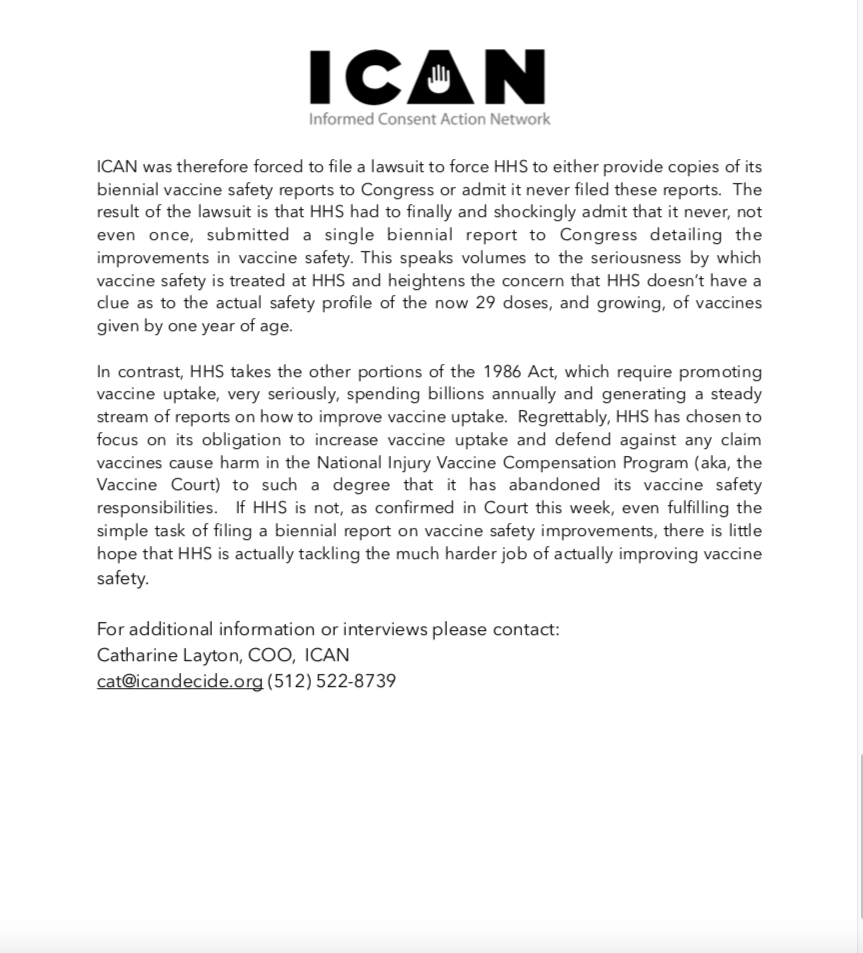 On Monday, June 9th, 2018, the United States District Court for the Southern District of New York signed an order granting Plaintiff, the nonprofit Informed Consent Action Network (ICAN), the relief it sought against the Defendant, the United States Department of Health and Human Services, HHS. ICAN was represented by Robert F. Kennedy, Jr.

In May 2017, ICAN Founder, Del Bigtree, Robert F. Kennedy, Jr.. and a handful of other individuals concerned about vaccine safety were selected by the White House to participate in a seminal meeting with the Counselor to the Secretary of HHS, the heads of the National Institute of Health, NIH, the Center for Disease Control, CDC, and Food and the Drug Administration, FDA. Del Bigtree and Robert F. Kennedy, Jr. suspected that HHS was not fulfilling its critical vaccine safety obligations as required by Congress in The National Childhood Vaccine Injury Act of 1986.

The 1986 Act granted unprecedented, economic immunity to pharmaceutical companies for injuries caused by their products and eviscerated economic incentive for them to manufacture safe vaccine products or improve the safety of existing vaccine products. Congress therefore charged the Secretary of HHS with the explicit responsibility to assure vaccine safety.

Hence, since 1986, HHS has had the primary and virtually sole responsibility to make and assure improvements in the licensing, manufacturing, adverse reaction reporting, research, safety and efficacy testing of vaccines in order to reduce the risk of adverse vaccine reactions. In order to assure HHS meets its vaccine safety obligations, Congress required as part of the 1986 Act that the Secretary of HHS submit a biennial reports to Congress detailing the improvements in vaccine safety made by HHS in the preceding two years.

ICAN therefore filed a Freedom of Information Act, FOIA, request on August 25th, 2017 to HHS seeking copies of the biennial reports that HHS was supposed to submit to Congress, starting in 1988, detailing the improvements it made every two years to vaccine safety. HHS stonewalled ICAN for eight months refusing to provide any substantive response to this request.

ICAN was therefore forced to file a lawsuit to force HHS to either provide copies of its biennial vaccine safety reports to Congress or admit it never filed these reports. The result of the lawsuit is that HHS had to finally and shockingly admit that it never, not even once, submitted a single biennial report to Congress detailing the improvements in vaccine safety. This speaks volumes to the seriousness by which vaccine safety is treated at HHS and heightens the concern that HHS doesn’t have a clue as to the actual safety profile of the now 29 doses, and growing, of vaccines given by one year of age.

In contrast, HHS takes the other portions of the 1986 Act, which require promoting vaccine uptake, very seriously, spending billions annually and generating a steady stream of reports on how to improve vaccine uptake. Regrettably, HHS has chosen to focus on its obligation to increase vaccine uptake and defend against any claim vaccines cause harm in the National Injury Vaccine Compensation Program (aka, the Vaccine Court) to such a degree that it has abandoned its vaccine safety responsibilities. If HHS is not, as confirmed in Court this week, even fulfilling the simple task of filing a biennial report on vaccine safety improvements, there is little hope that HHS is actually tackling the much harder job of actually improving vaccine safety. 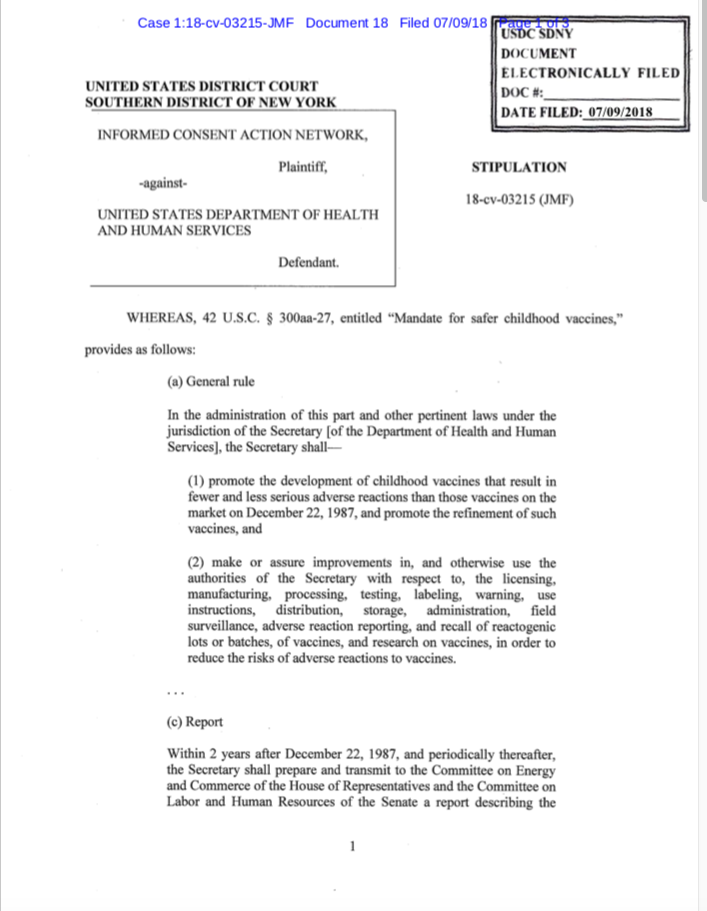 Here’s why Bill Gates wants indemnity… Are you willing to take the risk?

Thank you to S. for contributing this document to us @ ZMV!