The Supreme Court has ruled vaccines are “unavoidably unsafe.” Vaccines contain mercury, formaldehyde, aluminum, polysorbate 80, cell lines from aborted fetuses, tissue from hamsters, dog kidneys, monkeys, peanut oil adjuvants and much more. Would you put this in your child’s orange juice? No! Allowing hazardous material injections into their children’s bloodstreams has caused untold grief for tens of thousands of parents.

Vaccine Injury Court has paid out over $3 billion in damages.

Vaccines are not run through the same rigorous trials as drugs. A “vaccinated vs. unvaccinated” study has never been conducted. No one has ever done a double-blind placebo controlled study on multiple-dose vaccines given multiple times.

Most people who express vaccination concerns were at one time ardent proponents. The illness breakouts are occurring among the vaccinated.

The number of reported adverse reactions to the MMR since 1990 is nearly 7,000, and most are not reported. Why didn’t the article mention that?

A reasonable adult might be able to think that multiple toxic and neurotoxic substances simultaneously and repeatedly injected into the bloodstream just might cause problems. How does this match the “First do no harm” mantra?

The Disneyland measles fiasco created by the media was designed to raise fear. None of the children died. The media failed to mention that we now have an autism rate of 1 in 68. Autism is far more life-debilitating than measles. By 2025, the projected rate is 1 out of 2, and we are still saying vaccines don’t cause it. That makes some people feel good, but the reality is that many parents know better.

A good reporter digs for truth. Vaccines, however, are fiercely protected from exposure to truth. The media is solidly in bed with vaccine manufacturers. Thus, we have a grassroots movement that is trying to get the attention of the government, the media and the people.

The journalist, doctor, researcher or scientist who really listens, researches and thinks critically stands to lose everything. Guaranteed. Most are not willing to pay that price.

Meanwhile, our children are paying heavily. They have behavioral disorders, autism, asthma, allergies, seizures, permanent disabilities and much more. The pediatric specialists have waiting lists; the special education and regular classroom teachers are alarmed. The cost of caring for autistic children now totals $2,400,000,000,000 while we argue and believe the lies that vaccines have nothing to do with it. This helps the vaccine manufacturers keep the projected income increase at 12.63 percent while our children continue to be sacrificed on their altar.

Wake up, people! Documented evidence indicates that your doctor, public health worker and legislator have been intentionally uninformed by the CDC concerning the dangers of vaccines and the “herd immunity myth.” Go to www.westonaprice.org or www.nvic.org to learn more.

“Most importantly, the Act eliminates manufacturer liability for a vaccine’s unavoidable, adverse side effects.” 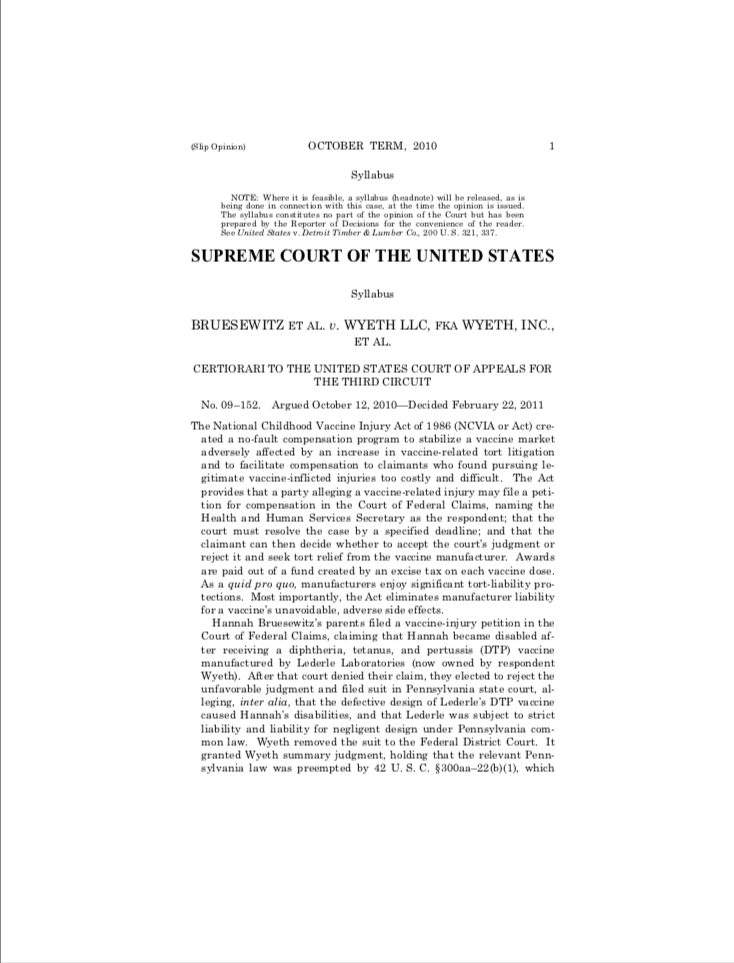 “The National Childhood Vaccine Injury Act of 1986 (NCVIA or Act) created a no-fault compensation program to stabilize a vaccine market adversely affected by an increase in vaccine-related tort litigation and to facilitate compensation to claimants who found pursuing legitimate vaccine-inflicted injuries too costly and difficult. The Act provides that a party alleging a vaccine-related injury may file a petition for compensation in the Court of Federal Claims, naming the Health and Human Services Secretary as the respondent; that the court must resolve the case by a specified deadline; and that the claimant can then decide whether to accept the court’s judgment or reject it and seek tort relief from the vaccine manufacturer. Awards are paid out of a fund created by an excise tax on each vaccine dose. As a quid pro quo, manufacturers enjoy significant tort-liability protections. Most importantly, the Act eliminates manufacturer liability for a vaccine’s unavoidable, adverse side effects.”