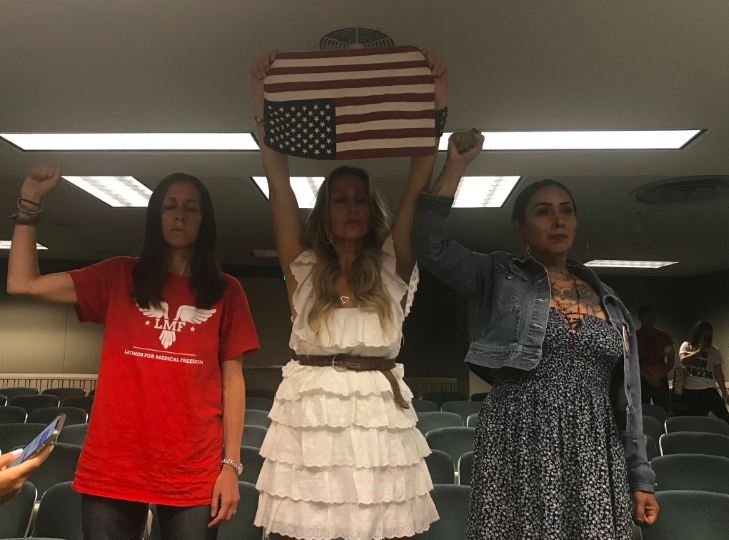 Despite threats of arrests by the California Highway Patrol, opponents of SB 276 by Sen. Richard Pan (D-Sacramento) who attended the Assembly Appropriations Committee hearing Friday at the California State Capitol, stood on chairs and voiced their opposition to the bill which will end all medical exemptions to state mandated childhood vaccinations.

Most of the parents protesting already have “vaccine-injured” children, and want the medical exemption for their other children.

Committee Chairwoman Assemblywoman Lorena Gonzalez opened the hearing Friday announcing that she would take SB 276 out of the order of bills scheduled “for the people who traveled.” And then she announced that the bill was passed out of the committee “on a ‘B’ roll call,” meaning all committee Democrats voted “yes” to pass it out, and all Republicans voted “no.”

That’s when the shouting and chanting started.

“You have not represented California for all,” the SB 276 opponents chanted, and chanted and chanted, while Gonzalez carried on with her hearing.

In prior hearings on SB 276, Sen. Pan said, “I want to make sure that every child who needs a medical exemption gets one. That is part of the purpose of this bill.”

But it hasn’t worked out that way.

Parents say because of this bill, they are already running into doctors offices who won’t touch a valid vaccine exemption request. In calling 882 California doctors to ask for a medical exemption for a child who suffered anaphylactic reaction after their 12 month shots, they were told no.

“Unfortunately at our office we wouldn’t do that for you.”

“Our doctors do not write medical exemptions.”

“We have a strict rule here that all children are immunized without exception.”

And that is the primary objection by parents to Senate Bill 276 – it disallows medical exemptions, even for families with previously vaccine-injured children.

Senate Bill 276 would eliminate almost all vaccine medical exemptions, allegedly to crack down on fraud, California Globe reported. “Under this bill, State bureaucrats — not physicians –would be in charge of deciding whether children may receive medical exemptions and thus whether they can attend school.”

Sen. Pan claims “According to the author, in the first four months of 2019, 465 measles cases have been reported across 19 states, a number far surpassing last year’s number of cases,” SB 276 bill analysis says. However, these parent-opponents of SB 276 did their homework and found that more than half of the adult measles cases in California were vaccinated.

More than 600 parents opposed to SB 276 peacefully rallied Wednesday at the Capitol, with most carrying signs around the outside of the Capitol, ahead of the Appropriations vote Friday. They reported talking with lawmakers and staffers about their concerns with SB 276.

While proponents of SB 276 call opponents “anti-vaxxers,” at every hearing I’ve attended since Sen. Pan’s first bill mandating vaccinations, AB 109, the majority of parents say they aren’t anti-vaccination, they just want to decide when their infants and toddlers receive the immunizations, rather than the state deciding.

Pan received $432k from healthcare/medical interests. And Pan says the contributions did not influence his votes. Laughable since he’s the author of AB2109, SB277 and SB276. And now he gunning for every adult to be vaccinated w/shingles & flu shots. #WeDid https://californiahealthline.org/news/health-care-industry-pays-tribute-to-californias-influential-lawmakers/ …

The leaders of California’s legislative health committees who wield power over state health policy have been showered with money from the health care sector, with drug companies, health plans, hosp…

Parental choice and decision making over childhood vaccinations was removed in California because of a state law passed in 2012. Assembly Bill 2109 by then-Assemblyman Richard Pan (D-Sacramento), orders that California school-aged children will not be allowed to attend public school without proof that parents have been counseled, and children vaccinated, in accordance with the vaccination schedule of the federal Center for Disease Control.

The only exception to the law was a personal belief or religious exemption – the only way Pan could get the bill passed.

As attorney Mary Holland warned this week at California Globe, “If the government wants to mandate vaccinations, it must ensure that they are safe for all children.” And that is all parents want.

Cal Assembly members,
Of the fraudulent exemptions cases that the Medical Board of California has investigated to date, there have been no fraudulent medical exemptions found.
The REAL reason SB276 is in front of you is these Pharma Donors to @DrPanMD (partial list of donors) 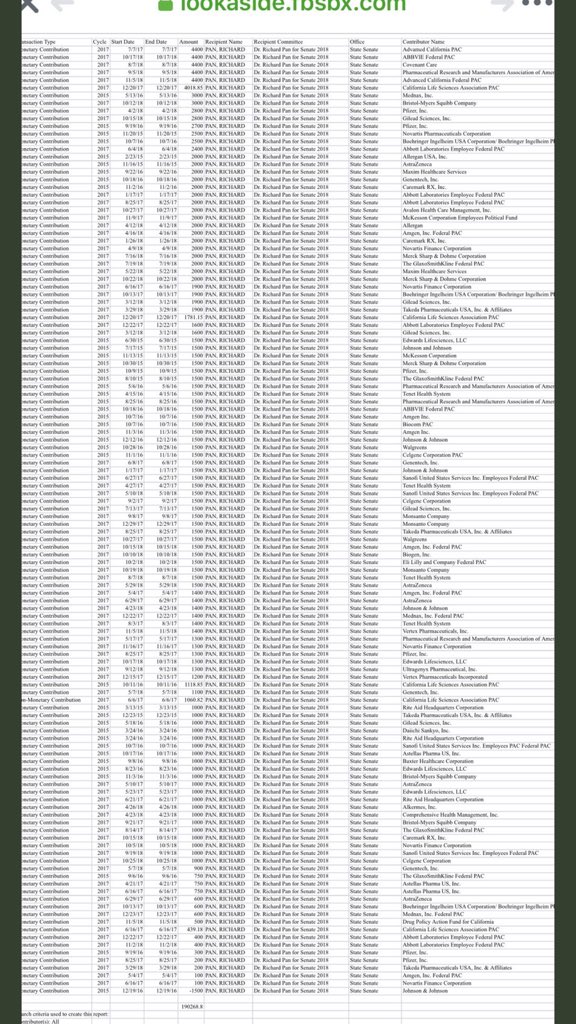 Four years later, Sen. Richard Pan came back with another bill, Senate Bill 277, to remove even the personal belief/religious exemption, following the measles outbreak at Disneyland. “We are in a situation where there are not enough people being vaccinated to contain these dangerous diseases,” Pan said at a news conference in February 2015. But he refused to address parents’ concerns about the volume and safety of vaccinations given to children.

But that wasn’t enough.

Read all of California Globe’s reporting on SB 276: