HEZE, China — First the news rippled across China that millions of compromised vaccines had been given to children around the country. Then came grim rumors and angry complaints from parents that the government had kept them in the dark about the risks since last year.

Now, the country’s immunization program faces a backlash of public distrust that critics say has been magnified by the government’s ingrained secrecy.

Song Zhendong, like many parents here, said he was reluctant to risk further vaccinations for his 10-month-old son.

“If he can avoid them in the future, we will not get them,” said Mr. Song, a businessman. “Why didn’t we learn about this sooner? If there’s a problem with vaccines for our kids, we should be told as soon as the police knew. Aren’t our children the future of the nation?”

The faulty vaccines have become the latest lightning rod for widespread, often visceral distrust of China’s medical system, and a rebuff to what many Chinese critics see as President Xi Jinping’s bulldozing, top-down rule.

The scandal is just the latest crisis to shake public faith in China’s food and medicine supplies, but it is the first big scare under Mr. Xi, who had vowed to be different. He came into office promising to “make protecting the people’s right to health a priority.”

“If our party can’t even handle food safety properly while governing China, and this keeps up, some will wonder whether we’re up to the job,” Mr. Xi said in 2013, the year he became president.

The anger here in Heze, the city in the eastern province of Shandong where the scandal has its roots, is evident.

About two million improperly stored vaccines were sold around the country from an overheated, dilapidated storeroom. The main suspect in the case is a hospital pharmacist from Heze who had been convicted of trading in illegal vaccines in 2009 and was doing it again two years later.

Many parents said they were especially alarmed that nearly a year had elapsed from the time the police uncovered the illicit trade and the time the public first learned about it in February.

“Withholding information doesn’t maintain public credibility,” said Li Shuqing, a lawyer in Jinan, the capital of Shandong Province, who is one of about 90 attorneys who have volunteered to represent possible victims in the case. “In the end, it makes people more distrustful.”

To many here, the combination of lax regulation and the secrecy surrounding a potential public health crisis seems like déjà vu.

In the SARS crisis of 2003, 349 people died across mainland China and hundreds more died elsewhere after officials hid the extent of its spread. In a scandal that came to light in 2008, at least six children died and 300,000 fell ill with kidney stones and other problems from infant formula adulterated with melamine, an industrial chemical.

“The customers worry about fake milk powder, fake medicine, fake vaccines, fake everything,” said Ma Guohui, the owner of a shop on the rural fringe of Heze that sells baby products. “This is certainly going to affect people’s thinking. My boy got all his vaccination shots. If he were born now, I’d worry.”

Despite such fears, the tainted vaccines are more likely to be ineffective than harmful.

The World Health Organization has said that outdated or poorly stored vaccines rarely if ever trigger illness or toxic reactions. Chinese government investigators said last week that they had not found any cases of adverse reactions or spikes in infections linked to ineffective vaccines.

The greater danger may be more insidious. The erosion of public trust could damage China’s immunization program, which has been credited with significant declines in measles and other communicable diseases.

After unfounded reports of deaths caused by a hepatitis B vaccine in 2013, such vaccinations across 10 provinces fell by 30 percent in the days afterward, and the administration of other mandatory vaccines fell by 15 percent, according to Chinese health officials.

The illicit vaccines in the current case were not part of China’s compulsory, state-financed vaccination program, which inoculates children against illnesses such as polio and measles at no charge.

The illegal trade dealt in so-called second-tier vaccines — including those for rabies, influenza and hepatitis B — which patients pay for from their own pockets.

The pharmacist named in the investigation, Pang Hongwei, bought cheap vaccines from drug companies and traders — apparently batches close to their expiration dates — and sold them in 23 provinces and cities, according to drug safety investigators.

She began the business in 2011, just two years after she had been convicted on charges of illegally trading in vaccines and sentenced to three years in prison, which was reduced to five years’ probation. Officials have not explained how she was able to avoid prison and resume her business.

Ms. Pang, in her late 40s, and her daughter, who has been identified only by her surname, Sun, kept the vaccines in a rented storeroom of a disused factory in Jinan. The storeroom lacked refrigeration, which may have damaged the vaccines’ potency. The police have detained them but not announced specific charges, and neither suspect has had a chance to respond publicly to the accusations.

Police investigators discovered Ms. Pang’s storehouse last April, but word did not get out to the public until a Shandong news website reported on the case in February of this year. Most Chinese had still heard nothing about it until another website, The Paper, published a report that drew national attention a month later.

It was the government’s intolerance of public criticism, critics said, that kept the scandal under wraps, a delay that now makes it harder to track those who received the suspect injections.

“We’ve seen with these problem vaccines that without the right to know, without press freedom, the public’s right to health can’t be assured,” said Wang Shengsheng, one of the lawyers pressing the government for more answers and redress over the case.

In the last few weeks, official reticence has been supplanted by daily announcements of arrests, checks and assurances as the central government has scrambled to dampen public anger and alarm.

Premier Li Keqiang ordered central ministries and agencies in March to investigate what had gone wrong.

Last week, the investigators reported that 202 people had been detained over the scandal, and 357 officials dismissed, demoted or otherwise punished. Health and drug officials promised to tighten vaccine purchase rules to stamp out under-the-counter trade.

“How could this trafficking in vaccines outside the rules spread to so many places and go on for so long?” Mr. Li said, according to an official account. Without decisive action, he said, “ordinary people will vote with their feet and go and buy the products they trust.”

Mr. Xi has so far not publicly commented on the scandal.

Dr. Rodewald, the World Health Organization expert, said the proposed changes were promising and would mean clinics would not have to rely on selling patient-paid vaccines for their upkeep.

Xu Huijin, a doctor in Heze, said that the concern over the scandal — and unfounded rumors of deaths — had depressed the number of parents bringing children to her clinic for inoculations.

“This was badly handled,” she said. “There was a lack of coordination, not enough information. We should have found out about this long ago. Doctors are taught to tell patients the full facts.” 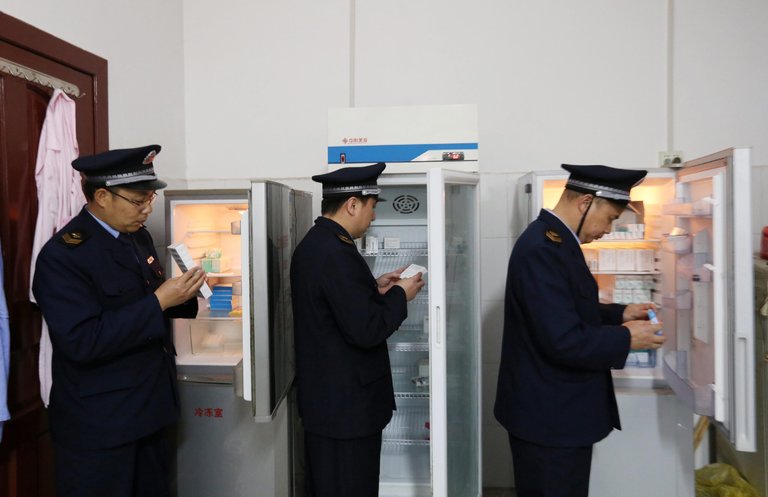 “BEIJING (Reuters) – A scandal over faulty vaccines in China has sparked anger on social media, underscoring the difficulties regulators face in rebuilding trust after years of food and drug safety scares.

The incident is a major blow for Beijing’s efforts to push domestically made vaccines and for China’s drug regulator, which has been struggling to clean up the world’s second-biggest drug industry.

Worried parents trying to ascertain if their children had been administered faulty vaccines led to the topic becoming the second most watched at the weekend on the Weibo social media site, with details widely shared on the WeChat messaging app.

“If the state does not protect its citizens, how can we love our country?” asked one Weibo user, while another lamented, “Looking at the news, I don’t dare to have an injection.”

The scandal erupted a week ago, after major vaccine maker Changsheng Biotechnology Co was found to have violated standards in making rabies vaccine for humans.

The regulator ordered it to halt production and recall all its vaccines, the company said in a statement.

On Thursday, however, it told the stock exchange that authorities in its base in northeastern Jilin province were fining it over substandard production, uncovered in 2017, of a DPT vaccine to combat diphtheria, pertussis and tetanus (DPT).

The defective vaccine might not confer immunity but would not affect human safety, provincial authorities had said in November, implicating another company, Wuhan Institute of Biological Products, in substandard DPT vaccines.

The Food and Drug Administration said in a statement on Sunday evening that its investigation had found that Changsheng fabricates production records and product inspection records, and arbitrarily changes process parameters and equipment, “serious violations” of the law.

It said the agency was investigating the company and suspected crimes would be handled by the public security department, adding that all vaccine producers would be inspected and any violations would be dealt with seriously.

In a stock exchange statement on Sunday, the company said its suspension of rabies vaccine production would have a significant impact on its finances and that some regional disease control agencies had suspended some of its other vaccines.

The latest problems come a little more than two years after police in northern Shandong province said they had uncovered the illegal sale of vaccines worth nearly $90 million.

Last week China’s Zhejiang Huaihai Pharmaceutical said it was recalling a heart drug sold in the United States after the European Medicines Agency found that it was tainted with an impurity linked to cancer.

The Changsheng scandal will hit confidence in domestic vaccines by rekindling safety concerns over products for children, a challenge state media highlighted.

“Vaccines directly concern the health of children and are related to life,” the state-run Global Times said in a commentary. “Every negative news item in this area will make all of society look at it.”